You won't believe it's gluten and rice free!

Brooke's takes pride in crafting all natural,  gluten & rice free dessert creations without sacrificing flavor or texture. Only using the finest all natural ingredients and Belgian chocolate for all there artisan handmade desserts.

How it all Began:

The idea for Brooke's Candy Company was being formed when Brooke was just a young teenager making mints for her sister Dana’s wedding shower. Her delicious treats had her neighbors placing orders for more. By age 14, Brooke was selling out of her homemade Peanut Butter Buckeyes at a local festival. After high school, Brooke moved away, met and married her husband Doug; but she never forgot about her dream of owning her own candy shop one day.

In 2004, Brooke and Doug moved back to Indiana. Brooke began work on perfecting the recipe that would become her signature Almond Toffee, which remains the top seller to this day.

After hours of tasting and testing, Brooke, Dana, and their mother Donna, also settled on recipes for the perfect Caramels, Pecan Turtles, Mints, and other goodies.

By 2007, a small Brooke’s Candy Company retail shop was opened inside the 1900’s Plantation-style home where Brooke and Dana grew up. Their parents, Donna and Kent spent years lovingly restoring the house to it’s original grandeur, and they shared their home with the Candy Company until a larger facility was opened in 2014. After the move, Donna retired.

Dana joined the team full time in 2015, and the sisters started a second company, Brooke’s Naturals, to provide all-natural, gluten and rice free baking mixes and treats to the wholesale market.

Soon Brooke's wholesale started out growing the retail. In 2018 the decision was made to close the Terre Haute retail store and partner with businesses to carry Brooke's Candy and Brooke's Naturals. This would help them in having time to grow the wholesale business and bring new products to market.

You can now find Brooke's products at stores such as Target, Fresh Thyme, Giant Eagle Market District and more! 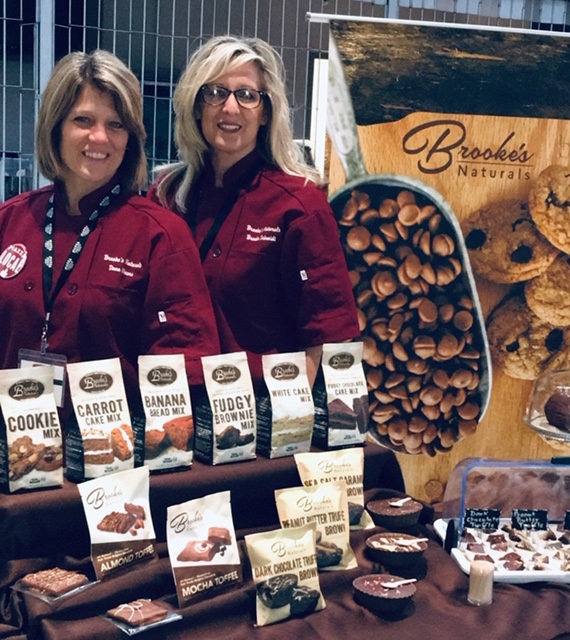